What Is the World’s Weirdest Language?! 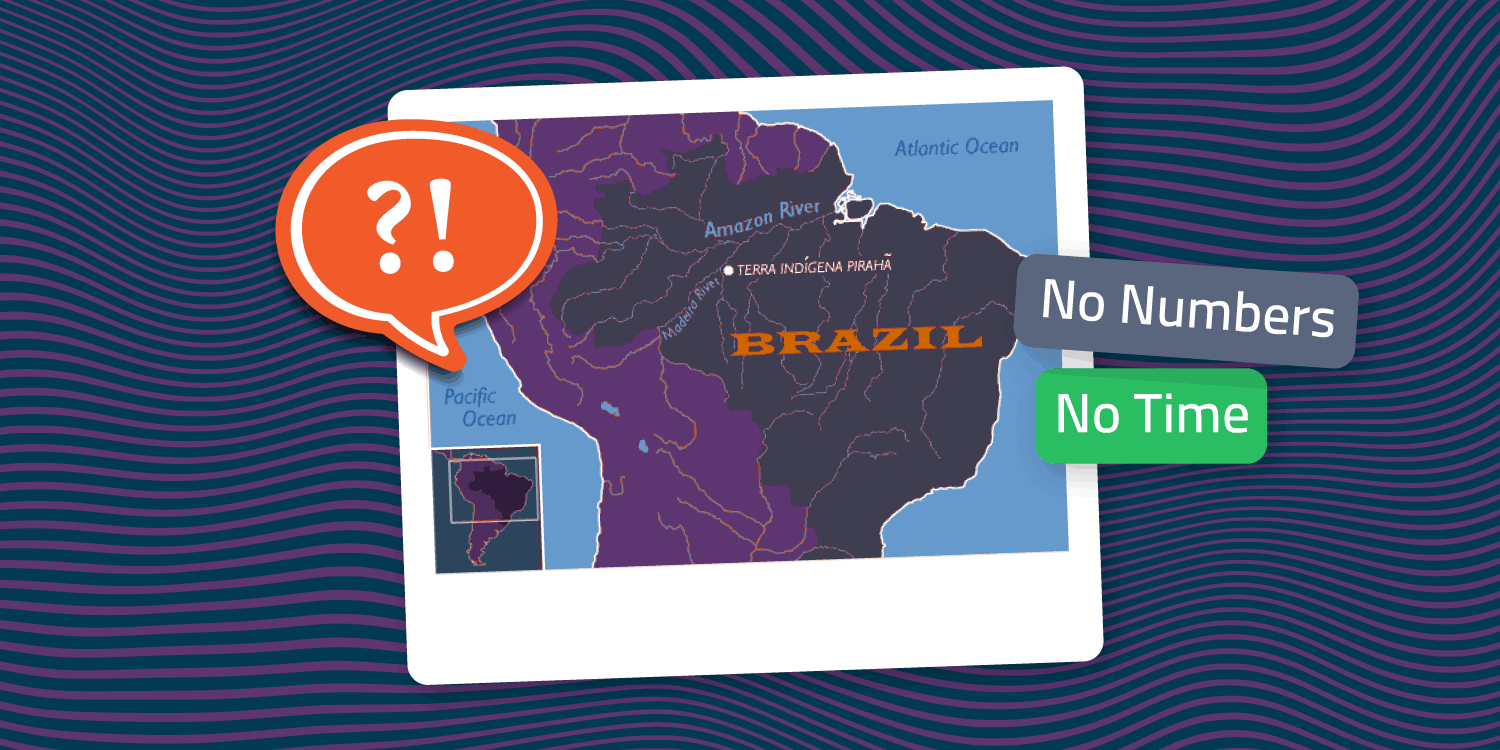 Editor’s Note: This article was originally published at ScienceNordic.

“The weirdest language in the world is without a doubt Pirahã,” says Rolf Theil.

The linguistics professor at the University of Oslo has picked his favourite among thousands of human languages.

The Pirahãs live along the Maici River in the Amazon jungle of Brazil and have become the darlings of language researchers. So much is radically different from Norwegian, or English.

Its pronunciation, vocabulary and grammar are all special. You can speak the language, sing it or whistle it. That is not easy for us to imitate.

Theil has not heard Pirahã in person. But the linguist understands the tonal system of a couple of hundred languages and can readily comprehend the instructions from another linguist, Daniel L. Everett, the British ethnologist who has lived with these hunter-gatherers and studied Pirahã longest.

Regarding the whistling variation of their language, Everett writes that the Pirahã describe it as talking with a sour mouth, the same description they use for sucking on a lemon.

Whistle, shout, sing
How do they understand one another when they whistle? This is possible because Pirahã is a highly tonal language, explains Theil. Another one is Chinese, which the professor speaks fluently.

Tone of voice is as important as the consonants and vowel sounds in Pirahã words. For instance their word for friend and enemy is the same, but the melody differs.

Norwegian also has a melody and it becomes clearer when mumbled. But Norwegians have bigger problems understanding mumbling neighbours than Pirahã do.

Communicating with tones and rhythms is not unknown elsewhere. A drum language exists in Africa and a whistling language is found on the Canary Islands. Users have high and low tones and vary the length of them, something like Morse code.

The advantages are many. The sound travels far and it can help when trying to get travel through the jungle without people or beasts knowing exactly where you are.

The shouting language, based on a single consonant and one vowel is yelled in various keys. It can come in handy when the rain is pouring down and you want to communicate with someone across the river.

The whistling language is reserved for men and is used especially when hunting as a way of outfoxing prey.

“Instead of yelling to the others and scaring off the animal, the hunter can sound like a bird,” says Theil.

“Although what can be expressed is limited, this is still useful for simple messages.”

No colours of numbers
Pirahã live in small groups out in nature. Their population is about 350. This partly explains why they lack words for numbers, colours and specific details about their family relations.

“We have words we think of as totally necessary, but they manage their daily lives fine without them,” says the Norwegian professor.

Numbers are superfluous, as they have traditionally not engaged in trading. Theil points out that without exchanging quantities of things for something else, cattle for a boat or for money, then you don’t absolutely need to count things.

When we would say “two” they would say the equivalent of “a somewhat larger amount”.

“This is actually rather common among the world’s languages – lacking lots of words for numbers. Often you can only say “one”, “two” or “many”.

A colour can well be described by something sharing its hue, like blood for red or leaf for green.

This can be the case in English, as the fruit orange, from the old French “orenge”, derives back through Arabic and Persian to Sanskrit “nāranga”. The colour orange took its name from the fruit. Until the 1500s English speakers called the colour “geoluread”, not unlike yellow-red. And it is no coincidence that “geoluread” is like Danish and Norwegian: “gul-rød”.

Women have fewer consonants
Four words are enough to cover the generations: One word for people older than yourself – whether they are parents or grandparents – one for all belonging to your generation – siblings and cousins – and one for daughter and one for son.

Pirahã might not be too concerned about relatives, and Everett says very few can name all four grandparents. But they are specific regarding to consonants. Women have seven at their command whereas men have eight.

Theil says many languages have schemes like this, also based on gender, simply because men and women often speak somewhat differently.

Different social groups can express themselves so distinctly that they have different consonants.

Norwegian has different “L” sounds based on how far back on the roof of the mouth the tongue is placed. In Oslo this has been an indication of which side of town a person is from, whether they were working class from the east side (tongue further back) or middle class from the west side of town.

Crazy number of verb forms
Pirahã people live in the here and now and do not conjugate their verbs, neither with a future nor a past tense.

Nor do they have singular or plural nouns. They might be talking about one man or many men, the context tells which.

They have only three vowels and maximum eight consonants. While children learning the alphabet in English hear of its “A, E, I, O, U and sometimes Y” rule for vowels, the actual number of vowel phonemes for Americans is 14 to 17, depending on dialect, and 20 or 21 for an Australian.

It is tempting to assume that Pirahã is a rather simple language. But its pronunciation and grammar are actually very hard for a non-native to learn.

It has a sound that probably does not exist in any other language, an “L” which ends up with the tongue sticking out and touching the lower lip. That may not be too hard to master, but get this, while English verbs have nine different forms, according to Everett every Pirahã verb has at least 65,000 forms!

Challenging Chomsky
Pirahã is also perhaps the only language in the world that lacks a recursive structure. This means that users cannot form a sentence like this: “Ola believes that Per thinks Lise is hungry”.

We do this in English often. We put a phrase into another of the same type, for instance a clause within a clause.

A Pirahã would have put it like this: “Lise is hungry. Per thinks so. Ola believes that.” So they get by without clauses, if Everett has this right.

It lacks subordinate clauses. Instead of “When I have finished fishing, I would like to speak with you” a Pirahã says “I finish fishing, I speak to you.”

But this bothers linguists, dramatically. It undermines major theory about sentence structure thought to be universal to all languages.

The world renowned American linguist Noam Chomsky is famous for his theories about a universal grammar behind all languages.

“So this has led to some seriously heated discussions amongst researchers,” says Theil.

A lot is at stake.

“If Pirahã really does lack this, it could be curtains for Chomsky’s system.”

Sign up for our newsletter and receive valuable insights on the world of Arabic translation and content writing, access to exclusive discounts on our services, and updates on the industry!

Have a translation project?

We can tailor a special quote for you in a few minutes.

Get a Free Quote Now!

Back to top
Page load link